We distribute product samples at train stations in major cities and tube stations in and around London. Why? Because they’re some of the busiest commuter hubs in the country. And with a typical example of nearly 500,000 commuters going through Waterloo every day, it’s easy to see why the sampling opportunities are so great.

We’ve spent nearly a decade at busy tube and train stations handing out millions of free sample products to commuters at rush hour. There are a number of ways we deliver this type of sampling activity from fixed promotional sampling spaces inside the stations, to strategic and lower cost options outside the buildings. Whatever the campaign budget, we have creative and effective ways to get products into consumers’ hands. 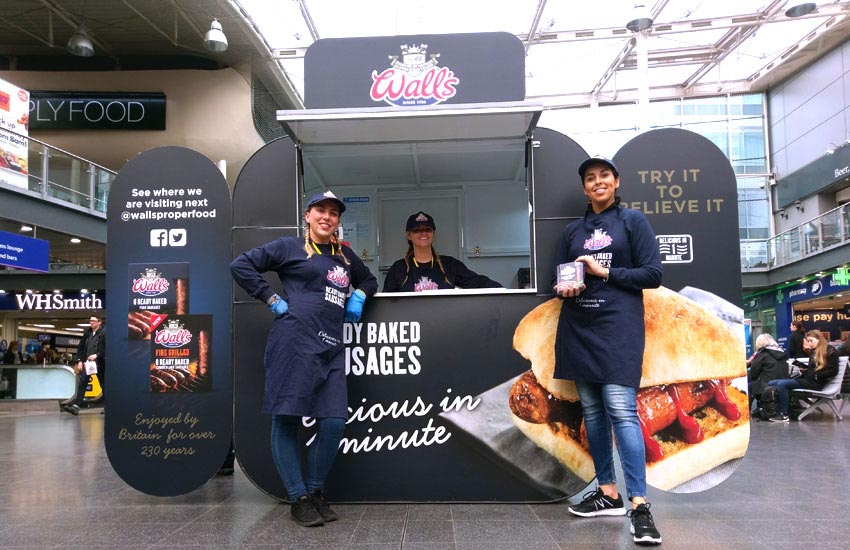 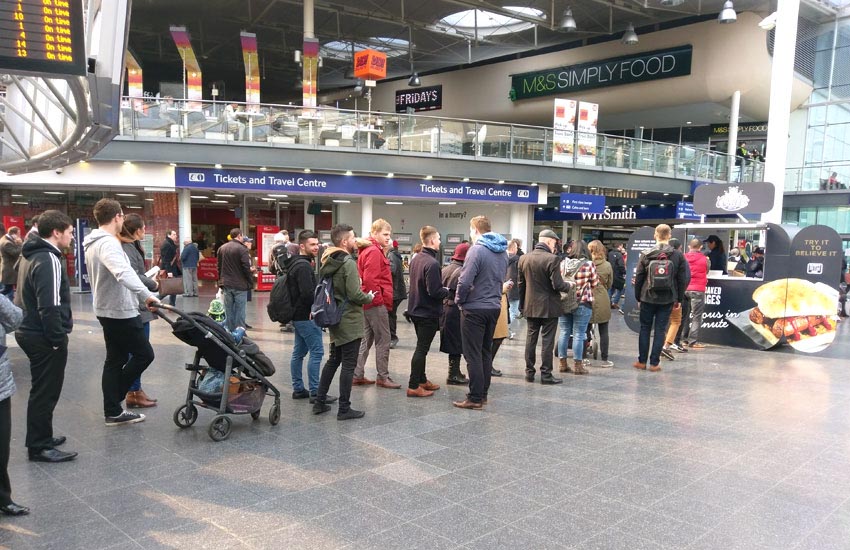 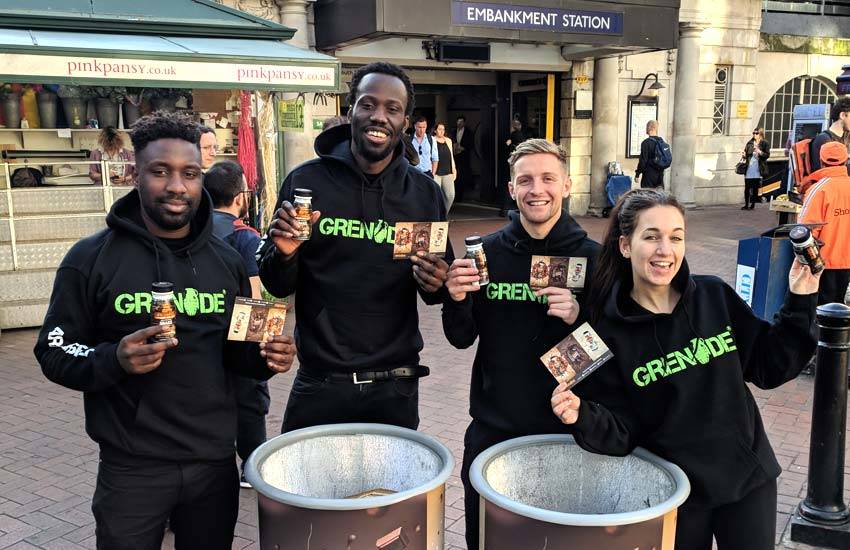 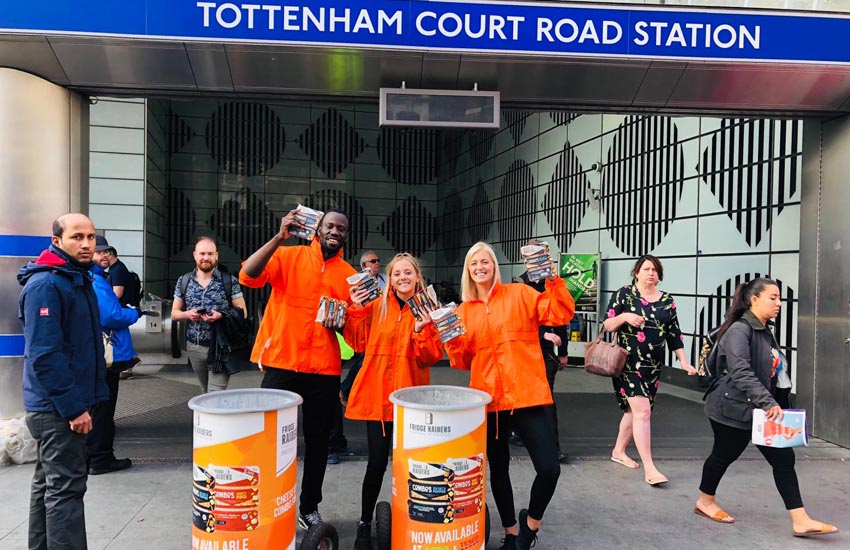 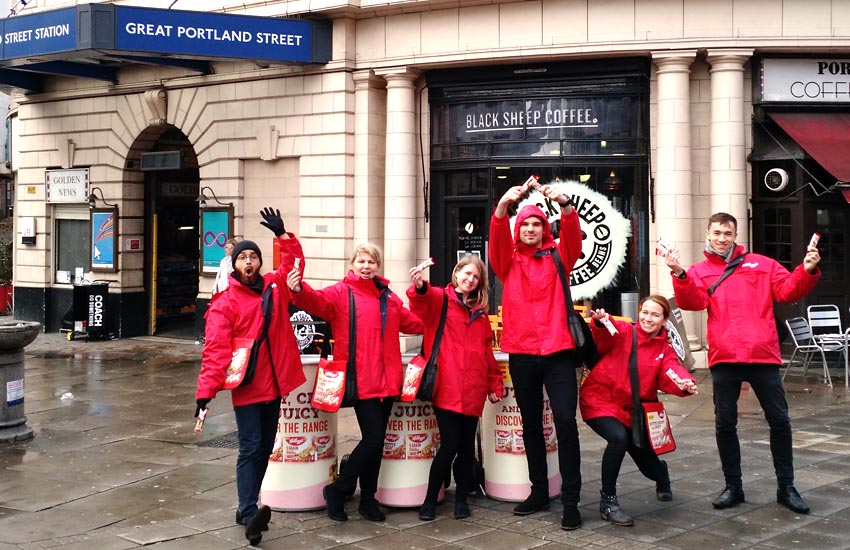 How We Do Train Station Sampling

We’ve handed out literally millions of free sample products at transport links and hubs over the years so we know what we’re doing and how to do it. There are two main ways our fantastic sampling staff distribute samples to the millions of train and tube station commuters going to and from work every day:

Fixed promotional sampling spaces (also known as event spaces) are designated areas inside train stations or on the concourses which are managed by either the station itself (eg. Network Rail) or a third-party management company. These spaces vary massively in cost, specification and visibility. The more prolific the space, the more expensive it will be. Sampling space costs inside train stations vary from £1500 for a spot big enough for a single sampling bin and two sampling staff members to £10k+ for a highly visible large-scale brand experience.

Roaming sampling with permits means just that. By purchasing sampling or promotional permits from the relevant or local authority it’s possible to hand samples to commuters outside the stations (as they enter or leave, for example). The benefit of this type of activity is that it doesn’t incur the high cost and restrictions of paying fees to go inside the train station, yet it can be almost as effective at getting access to the commuters. A typical sampling permit can cost anything from £25 per day per sampling team member; add in the relatively low cost of branded sampling bin hire and you’ve got yourself a cost effective campaign that could reach tens of thousands of consumers in s single day but at a fraction of the cost of a large event space.

Why Do Train Station Sampling?

Quite simply because it’s high volume. We call it ‘grab-n-go’ sampling as it can be very fast paced and we often distribute tens of thousands of units of stock in a single morning. The sheer capacity of the commuter footfall means that we very rarely return to base with any samples left over. But there are two sides to the different types of sampling (fixed and roaming). There are benefits to creating full fixed experiential sampling activations inside the stations – they are more engaging, have a longer dwell time, greater visibility and better opportunities to speak to consumers. On the other hand they can be costly and the CPS (Cost Per Sample) can be high. On the flip side roaming sampling creates less engagement and practically zero conversation but it gets huge volumes of products into people’s hands at a much lower CPS. We like both and we’re incredibly well placed to advise on how best to allocate the campaign budget.

Sampling at tube stations is a little bit different to sampling at train stations. Space inside is limited (and where available it can be expensive) but most importantly there are dozens of them… which means more opportunities to sample to commuters. Using the correct permits and applying through the proper authorities, you’ll often find our sampling staff outside some of the most popular tube station entrances and exits. It’s fast paced, high volume, grab-n-go sampling but the volume we can distribute during rush hour can sometimes run into the tens of thousands. And with a low cost product sample the value for money (VFM) can be very rewarding.

This is where iMP can really add value to a sampling campaign. We design, create, develop and build brand activations to work alongside sampling campaigns. A perfect example of an experiential sampling campaign we delivered is the Wall’s Ready Baked campaign we created. We visited most major train stations around the country with a specially designed sampling pod which we set up overnight in the train stations. It created a focal point for the activity, generated huge queues of hungry commuters and had a great visual impact. So in addition to the grab-n-go culture of volume sampling, it’s also possible to create a more engaging experience for consumers. This means better conversations, greater dwell time and a more memorable experience overall.

We’ve got more than 10 years experience in delivering this type of activity and we’ve got some pretty good reviews to show for it. Contact us using the form, email or call 0113 243 8194.